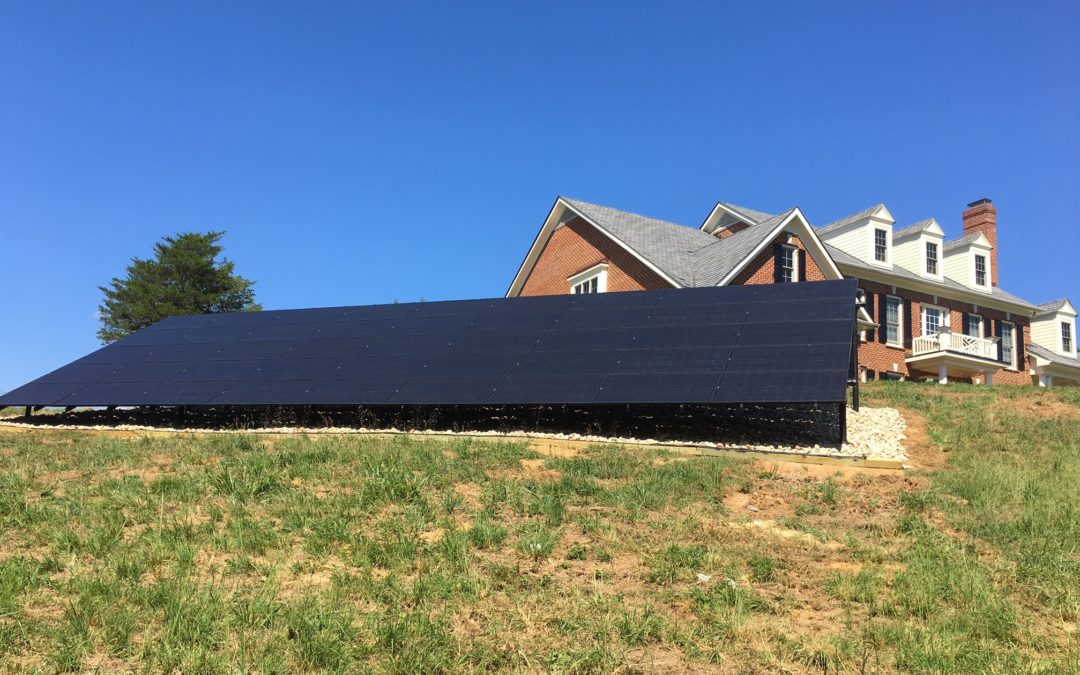 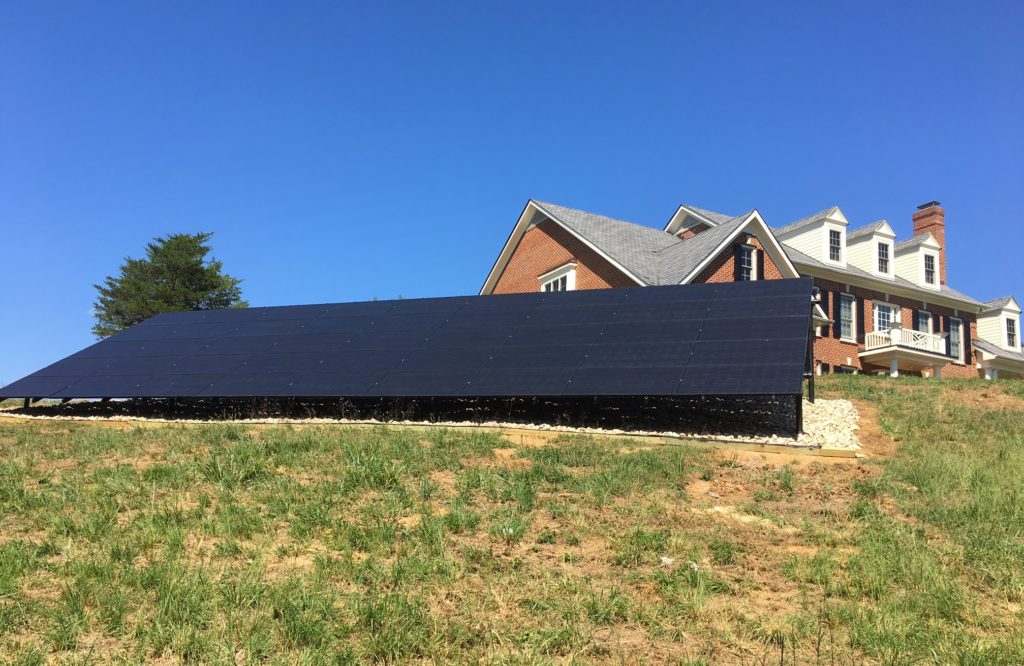 Diane and Steve Skalak had two goals in mind when they started considering a solar installation. First and foremost, they wanted to be more environmentally responsible.

At the same time, they wanted a financial investment that made sense. And with their new ground mounted solar array, they’ve met both challenges.

The site of Diane and Steve’s new home in Crozet, VA, is sunny and open – an ideal spot to capture solar energy. But the roof isn’t well suited to a solar installation.

For one thing, it’s unusually high. Even routine maintenance requires the use of an expensive bucket truck. And multiple gables break up the roof expanse into small areas, limiting the number of panels that could be installed.

“The economics would have been substantially different for a system that size,” Steve said.

With the Residential Renewable Energy Tax Credit that our team recommended, Steve compares the financial savings to more typical investments like municipal bonds. “It’s a reasonable alternative investment,” he said.

Once Diane and Steve chose a ground mounted system, they had to decide where to locate the array. When you have an entire property to consider – not just a roof – that question takes careful thought.

“We traipsed around with some wooden frames that they built and measured the articulation and the sun, what the meters read and such,” Diane said. “We considered several different sites… It was very collaborative.”

“We really felt like we found the ideal spot on all fronts – future use of the property, angle to the sun, convenience to the house, no real spoiling of the view,” Steve said. “It was worth the two or three days- worth of tramping around, changing our minds about six times – everyone was very patient with that.”

The site they selected is about 40 feet from the garage. It’s only visible from one spot inside the house: the master bathroom. But with the back of the array facing the house, we wanted to make the whole installation visually appealing from any angle.

Typically, the back of the array is hidden from sight – and it’s usually ugly, said SunDaySolar owner and project manager Richard Crisler. “Black wires contrast with the white back sheets of the panels. Aluminum and galvanized steel racking add another unfriendly aesthetic component.”

For the Skalaks’ installation, we used special all black panels and painted the racking black as well to create a clean, uniform, modern effect.

“It gives the whole thing a very sleek look,” Steve said. “It blends into the landscape.

The 45 Winaico panels will produce around 18,000 kWh a year. The grid-tied system is designed to power the Skalaks’ entire house even on a hot summer day, when energy demand is highest.

Agricultural fabric and rock aggregate will hold back weeds and grass, keeping maintenance of the system to a minimum.

Diane and Steve said they enjoyed working with our team throughout the consultation stages and the installation.

James Balcombe, our interior electrical guru, was responsible for mapping out an interior path for the wiring. “We had to traverse the entire length of the house, because the panels ended up being on the opposite side of the house from our electrical box,” Steve said. “James did that very smartly; it’s easy to access, easy to identify, very nicely laid out.”

Electrical engineer Layth Hasan “was very helpful when we were trying to figure out the position on the ground,” Steve said.

“He bore the brunt on a couple of very hot days, lugging the 2×4 frames around the yard, positioning them with stakes, standing in the line of sight pretending he was a tree… He understood immediately the relation of the contour of the ground and the appearance of the installation.”

“I found Richard to be a great listener,” Diane said. “He factored in our concerns and questions in whatever direction we needed to go.”

Steve said they chose SunDaySolar because we focus on personal service instead of offering a one-size-fits-all corporate program. “A local business, someone who would listen to us, someone with a lot of experience – we felt Richard would be much easier and more fun to work with than the other people we met.”

Diane agreed: “Richard is a problem solver. If you have a question, he’ll answer it. It’s easier to do a project – especially something you’re not that knowledgeable about – when you trust the people you’re working with, you trust their background and instincts.

Get a Free Quote Today